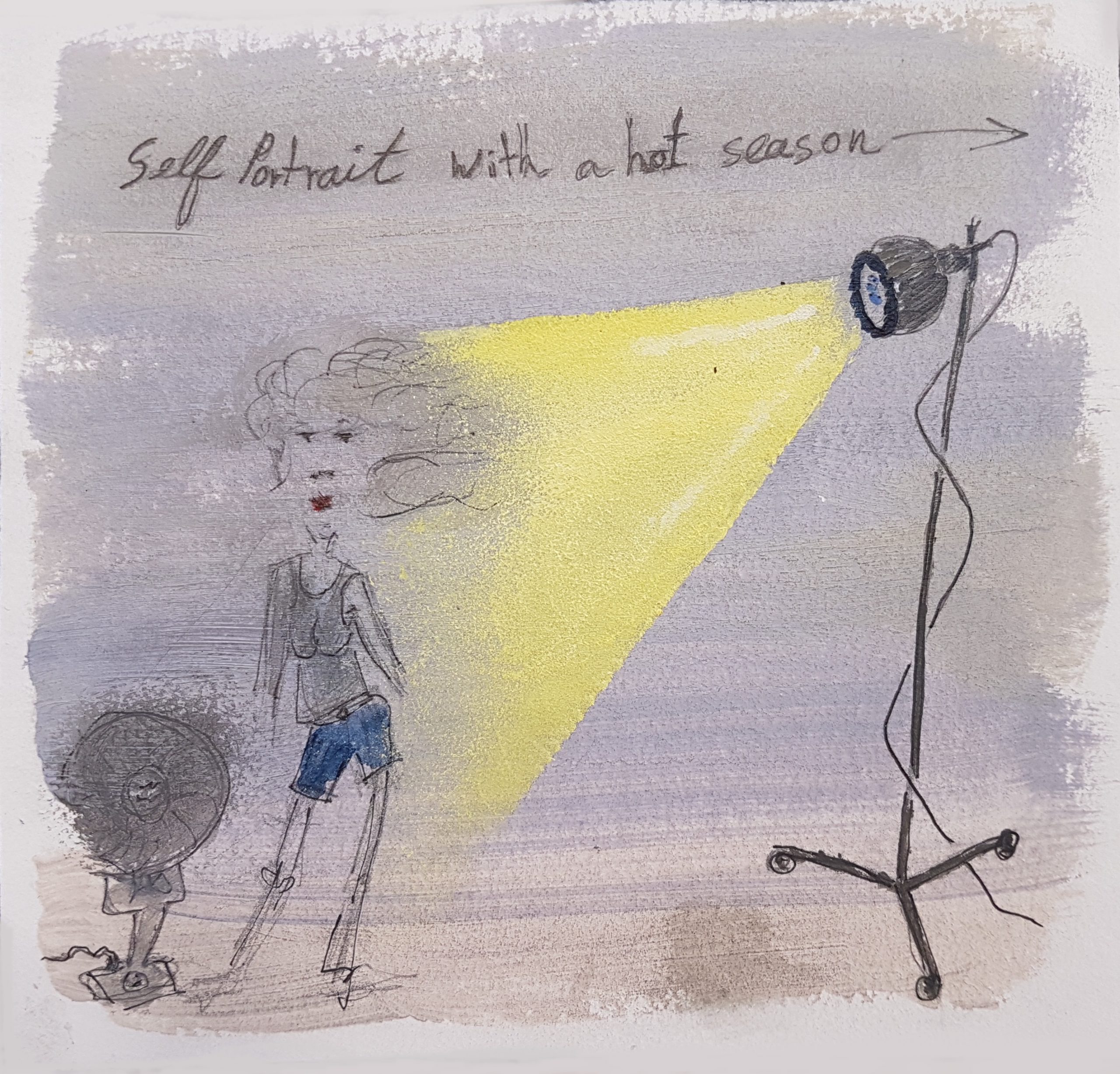 Series of self-portraits with defining objects or while an important daily action, put under the lights.

First-time-showing of cartoon drawings and painting works from 2017 – 18, (acrylic and oil-crayons on paper, wood and canvas) positioned against a collection of self portrait like videos from 2004 – 06.

‘With these works I’m looking into lights, stage lights.. the lamps themselves, and the grid they are hanging from. But especially how it feels to stand on stage-center right under the blinding lights, in their hugging flame. It’s hot and you don’t see a thing! .. yet you are seen so brightly and to a distance… but all the audience can see, in fact, is just a heightened illusion created by those lights. So you become a clear but flattened image of yourself, a portrait of an idea or a character reflecting the audiences own fantasy. Playing around with appearing and disappearing and the general craving to move between hiding in the shadows and popping up in the limelight.. that’s what its all about.. a poetic endeavor to be seen and hidden and seen at the same time.’

On the stage or under the lights / Martina Tritthart

‘To The Limelight’ covers a decade of theatrical self-portraits in video and painting from performance artist Anat Stainberg. Her early self-portrait videos (as early as 2004) are an ‘early bird’ YouTube selfies from a pre I-phone era. Where the video camera functions as a whiteness, testimonial, trigger and proof to the mundane procedures of the artist, or is she a fictional character.. and put them on the stage or under the lights.

Stainberg’s drawings and painting works (2017 – 18) are the next generation of the same conceptual approach, evolved over time and transformed to fit her contemporary aesthetic and social construction.

Her drawings and paintings include collages of emotions, philosophy and observations on daily routine of an actress, a lover, a friend, a businesswoman, a comedian, a mother, a wife, a woman. She is experimenting with the content as well as painting technics and the form of the frame. Keeping all ingredients of her art constantly in movement, Anat wants to touch or tickle the spectator. When you feel the light, you know what she means..