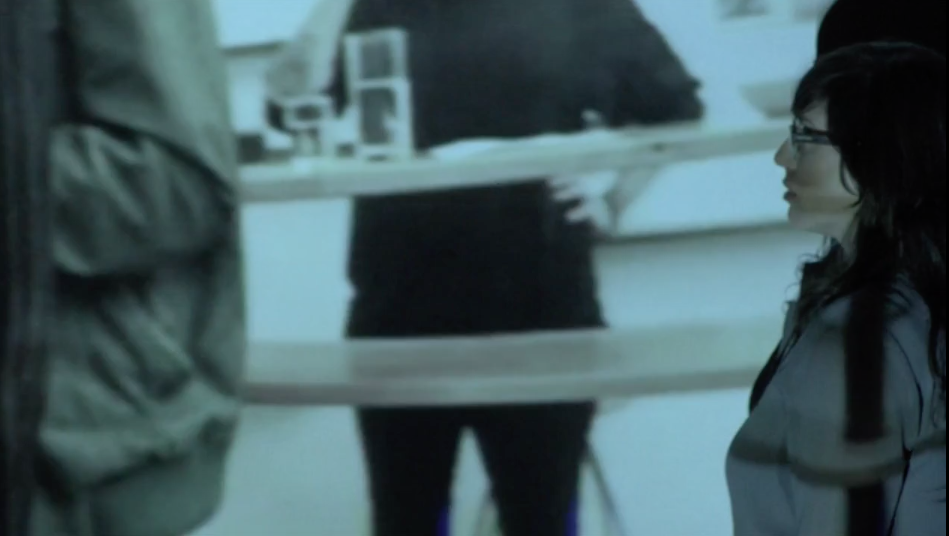 SPLITTER is an audio-visual concert performance with a kaleidoscopic blend of live performers/operators, video, comics, text and music. It is centered around a woman, who normally acts according to the social code of the culture she lives in. One day she stops dancing the social dance. And in that moment she ’splits’.

SPLITTER explores the split: the ability to exist in parallel situations –  to behave according to an expected social code and at the same time to maintain a hidden private narrative. For example, when you conduct a conversation with partners but ‘inside your head’, you are somewhere else. Traveling.. or observing the situation from above.. This separation between the mouth and the brains or consciousness is investigated in artistic and scientific ways and presented in diverse media and attitudes.

A co-production of DOUBLE DOUBLE and brut Wien.

With the kind support of the City of Vienna’s Department of Cultural Affairs, MA7.

What happens if you place yourself into your own parallel universe in your head and at the same time watch yourself during your actions as if from the outside? Billy Roisz and Anat Stainberg research this question by way of video, music, comedy and performances in Vienna’s brut theatre. The title “Splitter” refers to splitting off one part of the self into an inner reality, a world of imagination.

It is quite possible then that one ends up with a hair in front of the lens: the video artist Billy Roisz and the performer Anat Stainberg so-to-say give the audience glasses, a headcam which enables them to look into the interior life of the protagonist. While she is carrying out everyday activities, her world is presented in curved optics on a video wall. Apparently she (we?) is just waking up, rolling out of bed and making her way to the kitchen to prepare her breakfast. Slices of toast are put into the toaster and coffee beans are spilled on the floor, she is washing herself (us) the lens. It is as if one were the protagonist oneself – because the images reveal her subjective view of the world so directly.

But there is also action on stage: from the auditorium Anat Stainberg enters, her glasses suggesting that she is the person directly revealing her view of the things via video projections. But there is another person on stage, Billy Roisz, sitting at the control desk with her computer and sound equipment. She is similarly dressed, wearing the same glasses. When the person in the video props her feet up on the window sill, the woman on stage accompanies this action with an atmospheric song. Thus video and performance intermingle as if the person on stage had split off from her interior self. Two existences come together at times and sometimes drift apart.

Anat Stainberg interrupts the performance and turns to the audience to say something about her research on the subject “Drifting off in everyday life”: “googling” they came across terms such as “mirror neurons”, which enable us to understand others as social beings, and “cybernetics”, which is based upon the notion that in social systems the aims of others can be identified and one tries to find a way to reach them. Then she starts to imagine again – videos and images appear, to which the performer directly on stage behaves as if she were standing beside herself and commenting on herself. “I’m a one-person show, telling the life of a woman I know,“ sings Stainberg, and Stainberg and Roisz use sophisticated technology to tell this story about a woman brilliantly.

all info on one PDF: