Acting the role of a psychoanalyst Dr. Dora Hartmann

at the Toxic Dreams’ The Bruno Kreisky Lookalike. 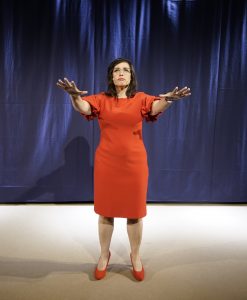 The Bruno Kreisky Lookalike received the Nestroy prize for an ‘off theatre’ production 2019.

The advertisement agency Critical Mass got a new product to promote. A cleaning liquid tentatively titled GLITZ. The agency decides to use a famous spokesperson to promote the cleaning liquid. After a long market research, the agency finds out that the most trusted and admired Austrian personality is the legendary Austrian chancellor Bruno Kreisky.
The agency then conducts a search for a Kreisky Lookalike to serve as their Glitz spokesperson. The casting team almost give up on finding a Kreisky Lookalike, when one of the team’s member discover by accident, in a U1 station, an insurance broker named Hermann Swoboda and immediately ask him if he will be willing to do the job.

The Bruno Kreisky Lookalike follows the story of Hermann Swoboda in the world of advertisement and product placement. His ascending to a status of a celebrity, his wife reaction to his new job and the new offers he gets.

The performance of The Kreisky Look-Alike spreads over 3 installments, all together 10 episodes, each episode lasting approx 22 minutes.

The Bruno Kreisky Lookalike, episodes 1 – 10 was created by Toxic Dreams (Yosi Wanunu) and co-produced by WUK. Supported by the land Austria (BMOES) and the department of culture in the city of Vienna.